The Goldfields Classic, run over 2 days of the WA Foundation Day long weekend, is one the few Handicap events on the Cycling WA calendar. Having had bikes transported by truck the day before, Stephen McNielly and Chris Howard took the $220 return charter flight on offer with about 80 other participants.

We arrived in  Kalgoorlie, and had a race briefing before hurrying to assemble our bikes in time. We met Greg Pengelly and Brooke Colton at the start line and braced ourselves for a cold ride.

D grade had 52 of the total 150 entries. The pace was brisk without being hard, but a good number were immediately dropped towards the rear of the peloton.  Not a good day out for them. The lead group had varying experience in rolling, and with the chaos that followed I decided it was a safer bet to stay off the 25 strong roll until they sorted their differences about 15 km in.  There were numerous sprint points along the way, but it was soon clear at least 10 others would whip me in a sprint, so I decided to conserve the limited energy for the 135km. A solid tail-wind had the lead breakaway D group, of about 22, humming along at 45kmph for the first 60km. The group was rolling so well, my pre-arranged musette back went flashing by at the 70km mark. I was already at 95% of my effort and I couldn't afford to slow and risk being dropped.

I knew that the A group had reeled all grades by the 60km mark last year, but with a tail-wind it was going to be harder. It was relayed to us that the C group was 8 minutes behind, with no word of the dreaded A group juggernaught. By the 90km mark my lack of conditioning was taking its toll, but with a rare chance of a D grade win, I took as many turns in the roll as I could. With about 10km to go we heard that C grade was about 1 km behind, but our roll was starting to fracture as fewer could help the pace. With no food or water left, it was a case of give it all you've got. A railway line indicated about 1km to Menzies and one last dash, I got to third wheel with open space on the left side, but dismayed as we had to pass 3 recreational riders who I knew would drift into my line. That was my missed opportunity I should have committed. With my left thigh seizing up I could barely get out of the saddle to sprint but finished 10th in the sprint finish.

With the endorphins, exhaustion, elation and realisation at what we'd done I found myself welling up with tears.

C and A grades followed within 3 minutes of our breakaway win, so the Handicapper was pretty spot on. I now was leading the GC on time!

Day 2 saw cross-winds and reduced handicapped times make for a hard day for D graders. I had nothing in the tank and could offer little to the pace as each attempted roll left me tired. I wasn't going to be able to contribute to the pace. The combined D-E group of about 50 quickly fractured to a lead group of 16 then 12 as the roll improved. At the 20km mark I was briefly caught behind a tiring cyclist, I soon found myself adrift of the lead group by 4 lengths and it took 5 minutes of max-heart rate just to get back on. I recovered by staying at the back, and could only roll through a couple of times.  In quick succession C grade and A grade swept past us, some of able to hold onto their wake for longer than others. The D grade breakaway was now fractured and working with splintered C grade riders. I encouraged a D grade foursome to push up with a hard pull, but only one came with me (thanks Justin Ing from PIH). We worked at our limit to reel in one, then two C grade riders who worked for a bit with us before they dropped as well. It was an agonising 30 metre gap to the leading D grade riders who were working with C graders. It felt like forever, but with one final push we got on their tail. We were immediately told to roll through, I won't repeat what I said! With 20 km to go every slight incline I felt like I was going to snap, but reminded myself how long and slow a solo would feel and how many would overtake me in packs. By the 10km I finally snapped, and did my best to stay on the drops and roll through a steady cadence, and tried to reel in Justin who snapped off the group a few kilometres later.

To my relief, the 80km sign appeared and shortly after the crowded street. I rolled through the main street for the first time and all the cheers were for me as I was solo. The finish involved completing a anti-clockwise loop around the town. It was hard to keep my balance in each corner, and I was grateful no one was behind me as a slowed and drifted wider each time. I tried to stand for one last gasp for the finish line as my hands and feet went numb.  I stopped, exhausted and shaking. Not enough to not go and check my times! I again choked up in tears as I found out I'd managed 5th in D grade, 29th in General Classification out of a finishing field of 114, and only 8.03 minutes behind best time. I'm not going to be humble about it, it was the best effort I've ever put in.

I hope to see you all there next year!

Things I've learnt on the Goldfields Classic
1) It can be cold....and wet. Be prepared and have spare kit for day 2.
2) Pay attention, you can be easily dropped from a big peloton, and its a long way to the finish.
3) Use your Garmin, otherwise you get out caught out while others are getting ready for the numerous sprint points.
4) Carry enough food and fluids for the full 135km and 105km days. Although there is a feed station on the first day, the pace may be too hot to slow down enough to get food.
5) Ride your own race, ride to your strengths. Don't be pressured into pulling a turn if it results in being spat out the back from over-exertion.
6) Unless your mobile phone network is with Telstra, Your phone is a glorified camera once you leave Kalgoorlie until you get back to Perth.
7) Kalgoorlie-Menzies-Leonora is true Ocker Australia, experience it.
8) It's a superbly run event, with PLENTY of catered food for Saturday dinner and Sunday breakfast.
9) You'll meet some great people and share a yarn.
10) All the better for sharing it with a friend. 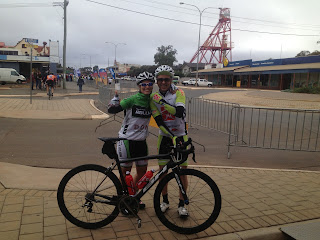 Brooke Colton (the 'cyclist formerly known as NBC') and Chris Howard at the Kalgoorlie start. 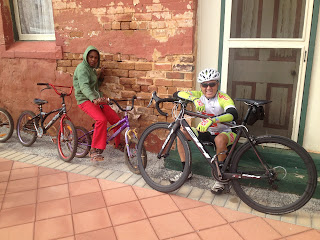 Elated and exhausted at the end of Day 1 in Menzies. My bike might as well have been a rock-star to the local kids. 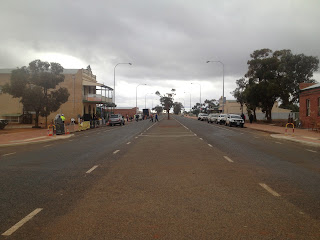 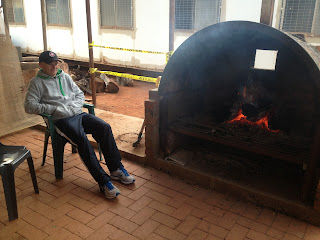 Stephen McNielly resting and warming at the Menzies Pub after a tough day. 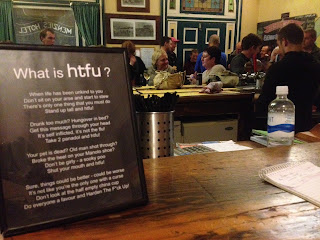 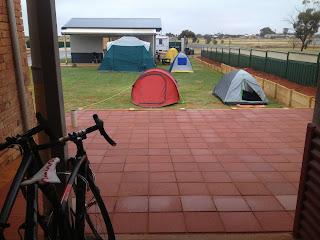 Menzies Caravan Park. A $35 tent does not guarantee dry feet. There is bus transport to basic mine-site accommodation out of town. 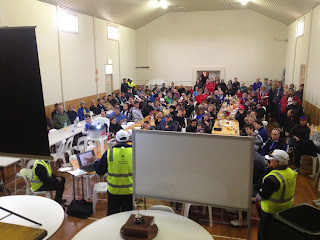 Menzies Town Hall. A huge variety of food is provided for Saturday dinner and Sunday breakfast. 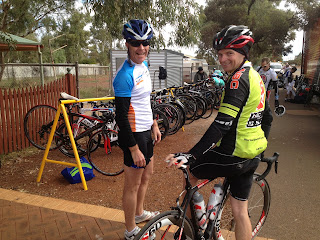 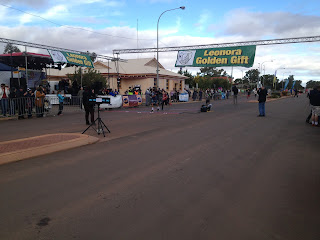 Leonora, Population @1000  The event is shared with the Leonora Golden Gift foot races, and attracts a crowd. A great welcome to be individually cheered home.
Posted by Chris at 10:29 PM 2 comments:

Come for a ride, stay for the coffee

Free ads for shops that give our members great deals

Free Silver NBC membership with every road bike sold! Plus min.10% off RRP for members